How to cite this article:

Erythroderma is an inflammatory skin condition

characterized by erythema and exfoliative dermatitis

involving 90% and more of the entire skin surface.

The initial lesions which are important keys for

understanding the disease evolution are often

occult [1]. The most common causes of erythroderma

can include pre-existing dermatoses (psoriasis,

lymphoma and leukemia, visceral neoplasias and other

manifestation of Norwegian scabies [1,5,6]. The latter

was first described by Danielson and Boeck in Norway

in 1848. Crusted scabies is another term used to name

this condition. This name reflects the main clinical

symptom of the disease – massive crusts which are

formed in various areas of the skin surface. In addition

to crusts and erythroderma, Norwegian scabiesis

The etiology and peculiarities of the disease evolution

have been quite competently systemized [5,7]. For the

last two decades the cases of Norwegian scabies have

Background: Erythroderma (exfoliative dermatitis) is an emergency condition in dermatology in which not less than 90%

of skin surface is affected. The presenting features are erythema, skin scaling and itching, fever and lymphadenopathy.

The most common cause of erythroderma is a preexisting dermatosis (psoriasis, atopic dermatitis, eczema, seborheic

neoplasias. Erythroderma is a diagnostically relevant presenting feature of Norwegian scabies. The aim of investigation: Is

to describe clinical peculiarities of scabious erythroderma as a special rare form of scabies, to assess the number of scabies

scabies.  Material and methods: We examined 5 patients with scabies and erythroderma as the main presenting

feature. All patients were women aged from 42 to 89 years. The disease duration was from 8 months to 1 year. The

causes of erythroderma were variable. Clinical and paraclinical methods of investigation alongside with dermatoscopy

and microscopy were used. Results This is the description of a rare clinical form of scabies, scabious erythroderma.

It is based on the analysis of the 5 cases of scabies, whose main clinical manifestation is diffuse erythroderma. The

diagnostic criterias of scabious erythroderma and differential diagnosis of Norwegian scabies are given. The invasive

potential of this form of the disease on the patient and beyond is evaluated for the first time. been described in HIV-infected patients [8-11], in

Massive crusts are the main symptom of Norwegian

to 2-3 cm. In some cases crust layers may cover

considerable areas of the skin surface forming a solid

dirty gray with a mixture of blood to yellowish-green,

grayish-brown or alabaster-white. The crust surface is

other localizations). The upper crust layer is firm,

the lower one is friable. Between these two layers a

great amount of adult and immature mites can be

found. On the inner crust surface one can see tortuous

The crusts firmly adhere to the skin surface and, if

burrows with in the crusts are “many-storied”. In the

larvae and eggs can be detected, and in the deep inner

are found. The number of mites on a sick patient is

immense, so the Norwegian scabies is highly contagious

with local epidemics breaking out around the patient.

Erythroderma is the second diagnostically relevant

cause of erythroderma in this case is considered to be

of an elderly patient with Norwegien scabies by

Staphylococcus haemolyticus. [34]. It is important to

note the observation suggesting that erythroderma in

Norwegian scabies arising on the background of both

earlier than in case when corticosteroid therapy is not

Other diagnostically relevant criteria of Norwegian

during the entire course of the disease; palmar-plantar

There are some case reports in medical literature

erythroderma as the main clinical symptom [38,39].

This rare erythrodermic form of scabies is still

insufficiently described in medical literature. That is

why some authors, having found areas of hyperkeratosis

(which are no crusts actually), diagnose such cases as

disease should be designated as scabious erythroderma.

One can assume that there must be far more similar

cases. Besides, it is recognized that Norwegian scabies

may have a localized form with crusts developing only

The aim of our study was to describe peculiarities

of the clinical course of scabious erythroderma as an

independent rare variant of scabies, to estimate the

number of mites on patients and in their surroundings

and to work out criteria of differential diagnostics with

We observed 5 patients with scabies in whom

erythroderma was the main clinical manifestation

8 months to 1 year. The causes of the disorder were

different in all the patients. The condition in the first

patient (aged 42) developed on the background of

this disease included prednisolone 60 mg/day during

were erroneously diagnosed. During 8-9 months the 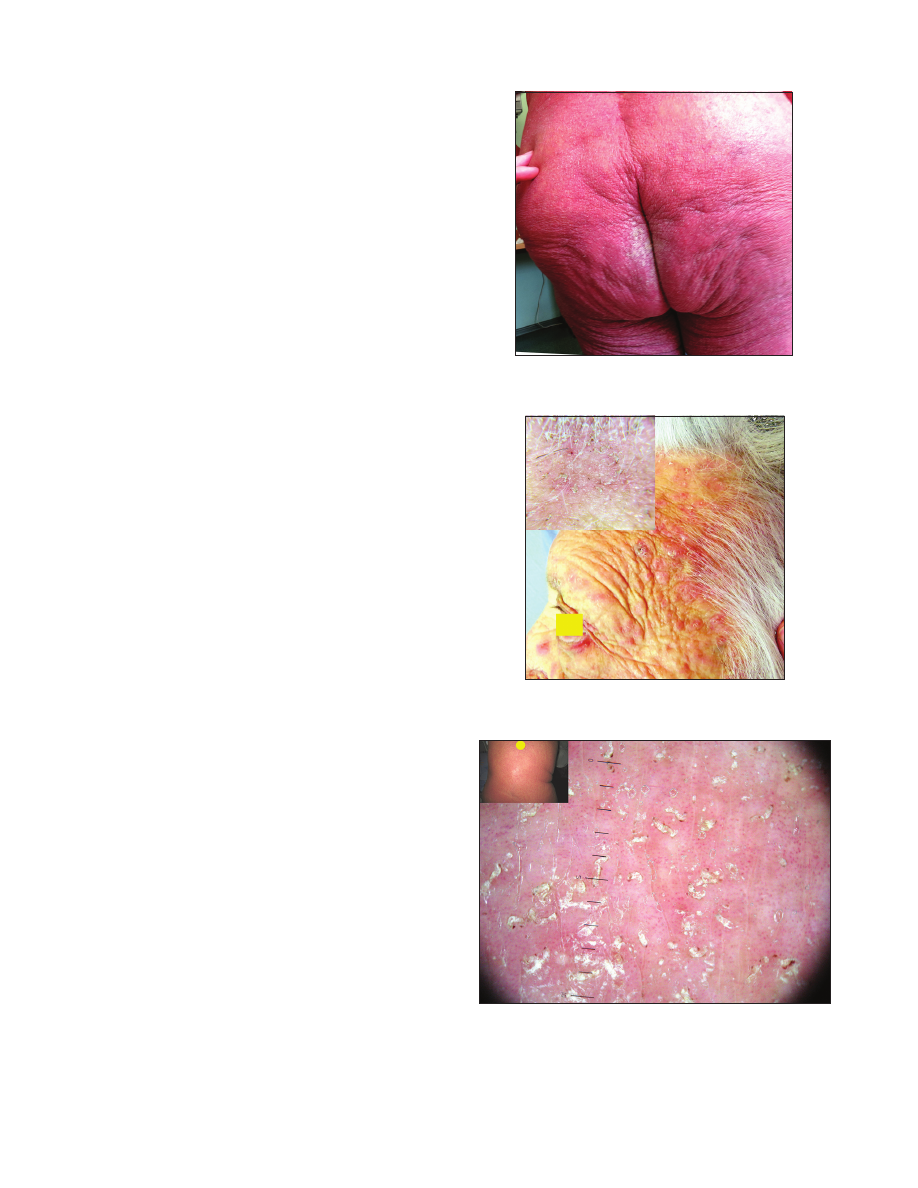 corticosteroids. The forth case was a 84-year-old

patient of psychoneurologic department. Many years

topically. The fifth patient (aged 89), in whom allergic

dermatitis and then drug-induced reaction were

topical corticosteroids during one year and then

appeared after 2 months of betamethasone injections.

In all cases the diagnosis of scabies was confirmed

included mite removal with the help of a needle,

application, dermatoscopy performed with the help

of the dermatoscope DELTA 20 and microscopy

with USB-microscopes of various modifications. The

number of burrows was counted visually and by means

of dermatoscopy and then the parasitary index was

determined. In the fifth patient the number of mites on

the apparently normal skin and in erythrodermic lesions

was counted in the field of a standard dermatoscope

with the area of 1 cm

. The efficacy of scabies

diagnostics by means of dermatoscopy and tape-test

was applied on an affected site of the skin for several

seconds and then quickly removed. The removed

piece of tape was paced on the slide and viewed with

the microscope. The quantities of mites in different

stages of development were compared in two epidermal

scrapings (from the abdomen and thigh) and in 4

Scotch-tests (from the foot, chest, back, thigh). The

number of mites around the patient was determined on

the sheet where the patient was lying. For this purpose

the adhesive tape (2x5 cm) was applied to ten different

sites on the sheet.

As an example we describe a case of a patient with

complained of the affection of the whole skin,

moderate itch increasing in the evening and chills

(in spite of high environmental temperature). The

disease had lasted for one year. The patient did not

connect any events with the onset of the disease and

considered the skin changes to be a result of “allergy”

(she had previously worked as a nurse). The first

symptom of the disease was itch in the interscapular

region. The itching sensation then gradually spread to

other skin regions. The patient’s daughter who cared

for her mother also complained of slight itch. Both

Focal hyperkeratosis  on the buttocks in scabious

Mite burrows in the interscapular region in scabious 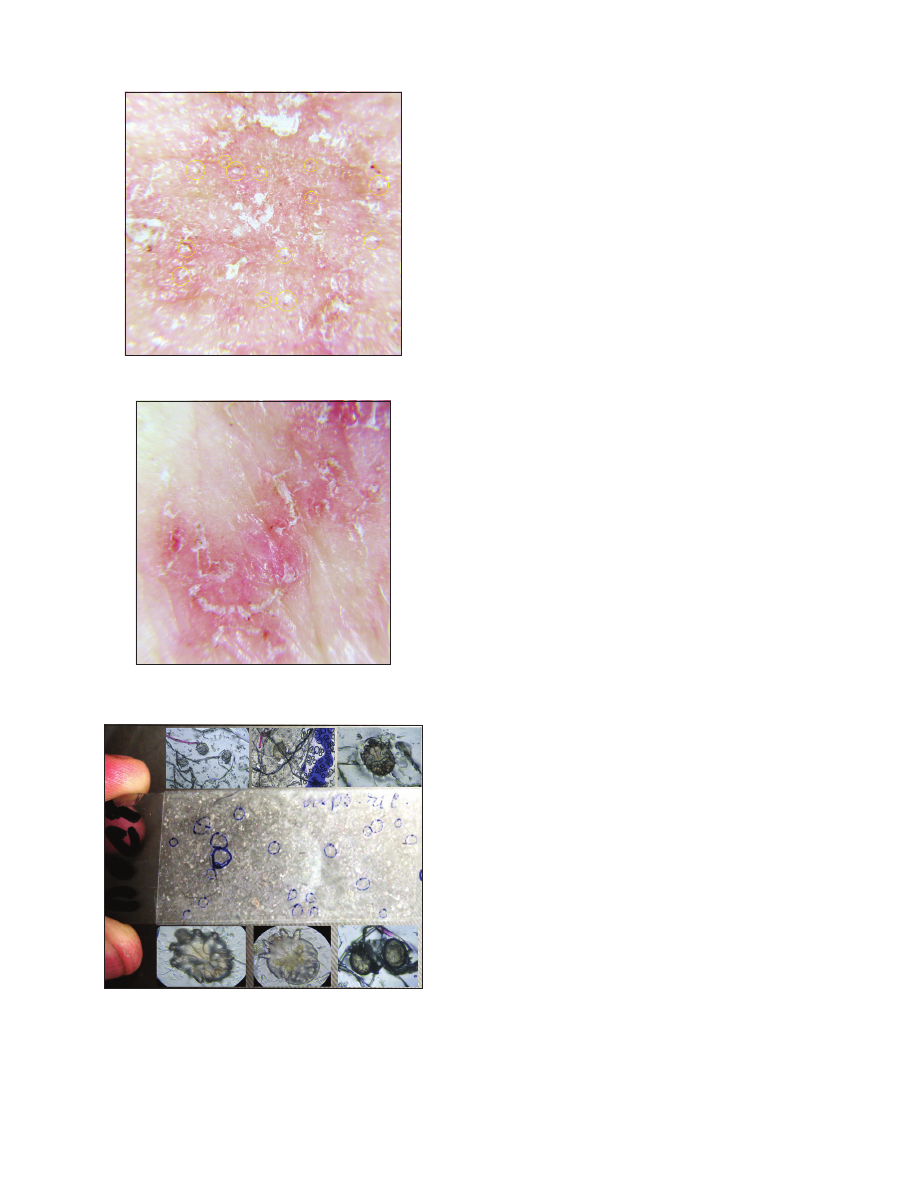 medicines against pruritus with no effects after this

self-treatment. On admission to hospital the condition

of the old patient was diagnosed as wide-spread allergic

dermatitis. The patient was treated with antihistamine

and desensitizing drugs and topical corticosteroid

was observed. The patient applied to 4 different

doctors but the diagnosis remained the same and the

treatment did not significantly differ from the previous

one. The therapeutic measures brought no effect.

Three months before admission to hospital the patient

was administered 2 injections of betamethasone per

fluticasone). While the subjective perception of itch

reduced, there appeared lesions of erythema which

creating the clinical picture of erythroderma. With

the diagnosis “drug-induced eruption” the patient

was admitted to hospital. The patient’s condition on

admission was satisfactory, the body temperature was

normal. The state of the inner organs and the revealed

pathology in general corresponded to the advanced age

of the patient. The regional lymphnodes were painless

Local status. The process was of a universal character

of the body. The skin was dusky red, dry and in some

and lichenification. The skin felt warm, firm and

rough. White dermographism was observed, but

crusts were absent. In the areas of the intergluteal

cleft (Fig. 1) and elbows there were foci of grey

marks were hardly present. On the background of

lesions on the forehead, chin, eyelids, ears, cheeks, and

the vermillion border of the lips. The skin of the scalp

was pale without any signs of inflammation. On the

skin of the shoulders and lower legs there were small

isles of normal skin. The inflammatory changes of the

fresh and destroyed burrows of various lengths were

observed predominantly in the skin folds. The number

of burrows detected without using a dermatoscope

the areolas. Burrows in other skin regions were poorly

visualized without a dermatoscope.

were within the normal range.

Mites outside the mite burrows in scabious erythroderma.

Mites in the apparently little-changed skin in the middle third

of the shin in scabious erythroderma.

Scotch test (tape test) from the surface of bed linen: a – slide

with the adhesive tape and visible parasitic elements, Dermatoscopy. In all areas of the skin surface multiple

mite burrows were found, including the face, frontal

were detected beyond the burrows (Fig. 4) even in only

was the biggest in those areas of the skin surface where

the inflammatory changes were the most dramatic

ones. In order to compare the effectiveness of visual

and dermatoscopic methods for detecting mites, the

parasites were counted on the palm skin surface with

. Only female mites located in the

burrows were visually detected (total 19). Twice as many

mites (total 41) were found by means of dermatoscopy,

including parasites beyond the burrows. Microscopy of

The number of parasitic elements clearly depended on

the size of the skin area to be scraped. In scrapings from

and in scrapings from the abdomen the number of

such elements was 25. Adult mites (male and female)

data show a high level of mite colonization in those

areas of the skin surface which are only insignificantly

affected in case of common scabies. The prevalence

of female mites and empty egg shells in skin scrapings

speaks for the presence of such burrows which, in case

of common scabies, are usually found on the hands,

For the diagnosis of scabies tape-tests were used. Their

results are given in Table 2.

surface 15 mites in various stages of development were

were also detected, but there were no eggs or egg shells.

Mites were found not only in sites of typical burrow

localization (feet) but also in those areas of the skin

surface where, in case of common scabies, elements

of metamorphic stage of the life cycle are localized

While comparing the effectiveness of dermatoscopy

and tape-test methods a considerable advantage of

dermatoscopy was evident. The number of mites

revealed in 4 tape-tests on the area of 10 cm

from 2 to 6 parasites. Dermatoscopy of the site with

the same area revealed 35 mites on the foot, 12 on

Three tape-tests were made with the sheet on which the

patient was lying (Fig. 6 a, b) which revealed 9 female

These results speak for a high invasive potential of this

scabies form. All family members who cared for the

With regard to clinical, dermatoscopic and microscopic

data the diagnosis of scabies in the form of scabious

erythroderma was made. The patient was treated

with benzyl benzoate ointment 20%. The next day

the efficacy of the treatment was assessed in terms of

mobility of parasites. Mobility was observed in 67%

of mites extracted from the burrows and in 92% of

mites removed from the apparently normal skin. In

tape-tests taken from the patient’s sheet 23 mites of

ointment was applied on the whole skin surface

once a day in the evening for 7 days. Simultaneously,

loratadine was administered. On day 8 a significant

reduction of infiltration and hyperemia was observed

and the number of mites on dermatoscopy decreased

Scraping from the thigh (6Χ8 cm)